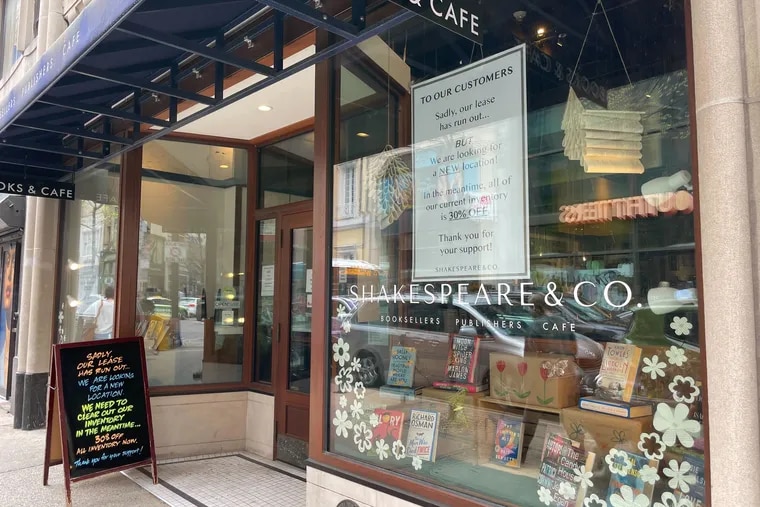 For the booksellers and the staff of Shakespeare & Co., the separation is such a sweet sorrow.

At least for now.

Although bookstore, cafe and publisher Rittenhouse Square has already reduced its operational footprint and will be closing within the next month, this is not necessarily a goodbye forever.

“Overall it was a good experience and we’re looking to stay,” owner Dane Neller said.

For now, however, the store – which has already closed its cafe and upstairs section – will close completely, another casualty of the COVID-19 pandemic. While the bookseller’s website lists a final date of May 12, store manager Michael Fortney said he was “not exactly sure” of the closing date. It depends on how quickly stocks — all of which are 30% off — sell.

If bustling business on Saturday was any sign, that day could arrive sooner rather than later.

Shakespeare & Co. opened in the 1600 block of Walnut Street in 2018, the first Philadelphia outpost of a legendary New York mini-chain that initially withstood the onslaught of Barnes & Co. Noble, then from Amazon in the 1990s and 2000s. By the 2010s, only one location remained, on the Upper East Side of Manhattan.

Neller, who bought this store in 2015, has sought to expand its footprint. He regained a foothold on Manhattan’s Upper West Side and opened his first branch outside of New York City in downtown.

In just four years, the stylish wood-filled store has become a local favorite. The front-of-house cafe, a well-organized inventory of books, and a staff that one Yelp reviewer called “ridiculously capable” drew a steady stream of customers.

Then came the pandemic. Soon, Shakespeare & Co. abandoned plans to expand into New York. And while he wouldn’t share the numbers, Neller said business was much worse in Philadelphia than at other New York stores.

Then there is the competition. Not only does Shakespeare & Co. take on online giant Amazon, but also old foe Barnes & Noble, which operates a store less than two blocks west on Walnut.

Even though physical book sales activity exploded as the pandemic subsided, these combined forces prevented a full recovery of the Philadelphia store. Its closure will mark the loss of a second independent bookstore in this part of town this year. A block north, on the 1700 block of Sansom Street, the Joseph Fox Bookstore closed permanently Jan. 29 after 70 years in business. Its second-generation owner-operators also said sales have not rebounded to pre-pandemic levels. Michael and Judi Fox also said they wanted more time off.

» READ MORE: The best independent bookstores in the Philadelphia area

Shakespeare & Co.’s lease on Walnut Street is up as of mid-May, and while Neller didn’t discuss terms, it was clear he wouldn’t be renewing it. He also wouldn’t say what his plans are for the five part-timers there.

Neller said he hopes to stay in Philadelphia, although he doesn’t know where. Shakespeare & Co.’s next location must be close to readers, well away from competition and with rent at the right price, Neller said.

“It saddens me that this has to end,” he said, “but hopefully we will open a new chapter.”