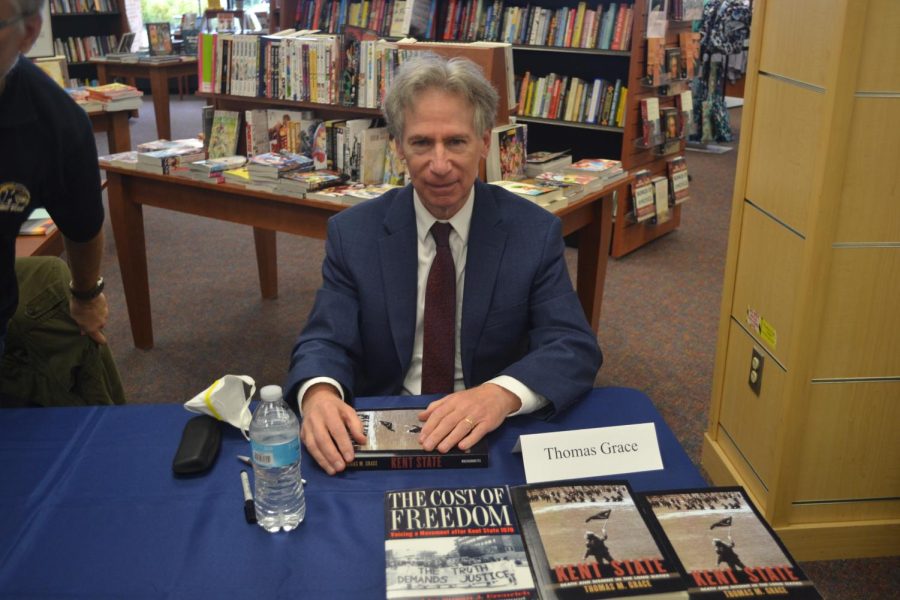 The Kent State University bookstore was packed with students, staff and alumni on the morning of Wednesday, May 4, 2022.Long tables were covered in blue cloth with name tags from various authors, all of whom wrote books about the tragic event that took place on campus 52 years ago.

Some of these authors were Kent students at the time of the shooting, while others were touched by the stories of survivors.

One author, Robert Giles, was editor of the Akron Beacon Journal on the day of the attack.

â€œWe covered a number of protests here on campusâ€¦so we had good sources and we knew how to get the story out,â€ he said.

Gilles’ book When the truth mattered is described as an authoritative novel, and it tells the stories of his fellow reporters at the scene of the shooting.

In fact, on the day of the attack, Giles’ press team was able to share the story with the public at 4:30 p.m., thanks to a secretary in the office of the dean of journalism, who enabled the phone line for the school to continue to operate.

A student journalist was able to get in touch with the secretary, and he covered the shooting as best he could.

â€œOne of the key things on the morning of May 4 was that we had a young journalism student who was a freelancer for us,â€ Giles said. “And we didn’t think there would be any violence, so we sent him to campus with two photographers.”

Giles’ novel is also about the strained relationship between Kent’s students and the outside community.

To most people at the time, the protesters were seen as hippies who had taken a tough stance against the US government.

“All they were doing was expressing their First Amendment rights to protest a people’s war, and they were really upset about the presence of armed soldiers on campus,” Giles said.

His team of reporters at the Akron Beacon Journal eventually won the Pulitzer Prize in 1971 for their work on this particular story.

Sitting next to Giles was author Sabrina Fedel, who wrote a young adult fiction novel about a young girl who wanted to study art at Pratt Institute, but ended up at Kent State.

The story’s main character, Rachel Morelli, is also “in love with a child who has just returned from Vietnam that she grew up with, so she sees how he has to sort of fit back into society,” Fedel said. .

In order to write this particular story, Fedel had to dig into the Record Courier archives from the week of filming, and she also spoke with members of the university to find out more from a historical perspective.

Speaking of the shooting, she said: “[i]It kind of shows how Kent became a microcosm of what was happening across the country and how what happened here could happen here.

Seated at a few tables were Chera Thompson and Neal (NJ) Johnson, Kent State alumni and co-authors of A time to strollwhich is the story of a hitchhiking trip they both took.

The couple took a 16,000 mile road trip together, and the book is told from the perspective of when they were teenagers.

It also mentions historic moments in Kent State history, as Thompson and Johnson started college in 1971, just a year after the events.

“We included the filming in the first part of the book,” Thompson said.

While in college, Thompson also said there were a lot of significant issues going on in the United States.

“You had to decide, a lot of decisions,” Thompson said. “Women’s freedom, civil rights, all that.”

One of the event attendees, Joe Collum, played softball at Kent State with Jeffrey Miller, who was one of four students who were killed on May 4.

Collum originally studied at Kent from 1968 to 1971, and he has been returning to campus for 40 years to commemorate historic events.

“I was one of 25 people charged for what we did, after we were shot,” Collum said.

He mentions the university’s willingness to teach students about shooting, saying, “[i]It took a long time for college to come to terms with the fact that this happened and make it a teachable time instead of trying to run away.

Collum added that â€œthe educational process continues. Yet many people have the wrong information about the events that happened that day.

Another person present was Kjera Sereji, a former employee and current student at the university.

Sejeri took the separation plan offered to staff members during COVID, which came with four years of schooling.

Now she makes time to study topics of personal interest, including a class called Media Advocacy and the May 4 class as well.

In Media Advocacy, her class focused on movement.

â€œOur group, the movement that we studied was SDSâ€¦â€ she said.

Sejeri was able to speak with old and new members of SDS, or Students for a Democratic Society.

She also credits the May Fourth Task Force, as well as students including Colt Hutchinson and Maya Niesz-Kutsch, as well as Avery (last name unknown) for heightening her passion for May Fourth.

“Interest has only grown since then, as well as activism, and learning more about it.”

At noon, the bookstore event ended and events moved to Prentice Hall for the 52nd Anniversary Opening Ceremony.

Morgan McGrath is a journalist. Contact her at [emailÂ protected]