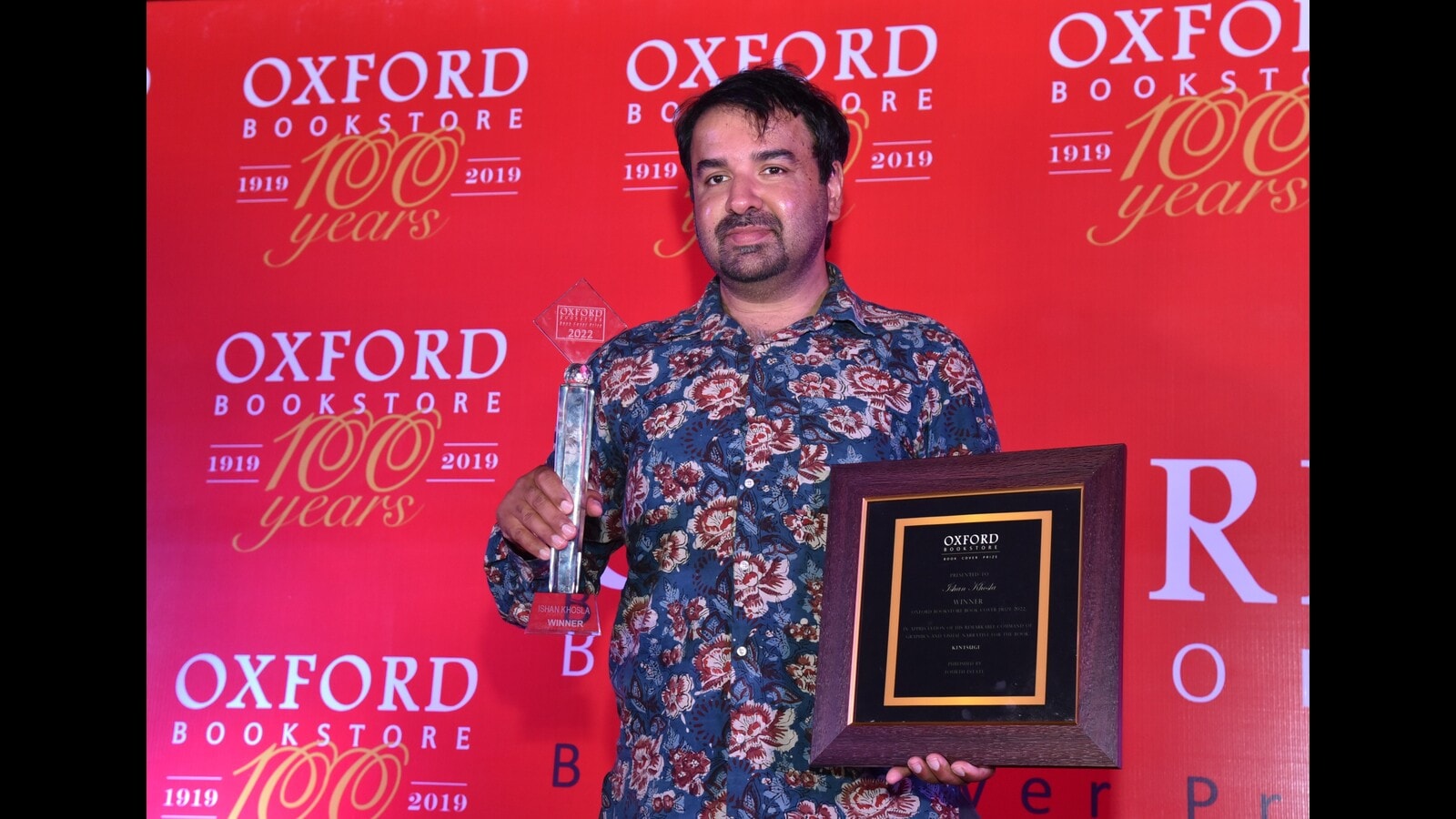 How do you feel about getting this recognition?

It’s quite an honour. In India, unlike the West, we don’t have many book cover design awards. This makes it even more special. Here, there is definitely a lack of appreciation or even understanding of the work that goes into designing a book cover. It is an art form in itself. You have to convey the essence of an entire book on a small piece of paper. As the cover designer, you must help sell the book. The cover should look bold, exciting and interesting, and you should also stay true to the author’s vision. It is difficult to accomplish this. In addition to being beautiful, the cover must have substance. It must be meaningful.

What was the brief that the publisher gave you for the cover of Kintsugi?

From my interaction with the editor and the author, I got the impression that the book tried to present a series of interconnected stories with frailty as one of the common threads. It is a very tender book. It goes between Jaipur and Japan. I’m a big fan of both places. I have been there several times and immersed myself in this philosophy, this culture and this geography. One of the characters moves from New York to India; it reminded me of my own homecoming.

Before I start designing the cover, I like to read the book. It’s really important to do that as a designer. It’s important to talk to the author and publisher to understand how they see the book and how they would like to present it. It helps when viewing.

Did you feel an emotional connection to the book?

Yes! The markets of Jaipur, the world of jewelry, visiting Mount Fuji in Japan, all those snippets of New York â€“ it all felt so familiar. I found the story very moving. I liked that Anukrti kept it a bit open. The reader is invited to take the pieces and put them together, much like completing a puzzle or completing a picture. I wanted to bring that metaphor into the cover. I tried to use five different ceramic pieces to explore the qualities and traits of five different characters from the novel.

I made about three to four versions of the cover. They were all quite different from each other. The only thing that was a common element everywhere was this idea of â€‹â€‹conservation, of renewal.

Since you traveled to Japan, you must have been familiar with the practice of kintsugi â€“ the Japanese art of repairing broken objects with gold â€“ before this novel.

Yes! Around 2016, my wife and I did a project together, working with fragments. I’m quite fascinated by ancient pottery, Harappan shards in particular, because of the stories they tell about peoples and civilizations, tools and techniques.

We were mainly interested in the fragments from South Asia, but we also learned about kintsugi. It is fun to compare this with the practice of Rafou that we have in India, where we try to mend clothes. With Rafou, the part you are repairing is almost hidden. With kintsugi, there is a celebration of imperfection. I don’t know if that’s the right way to put it. It’s a bit difficult to explain. It’s almost human, right? For example, I have scar tissue from having had a few surgeries when I was younger. Sometimes I feel like, oh my God, I have these scars and gashes, and then I suddenly remember how much of a part of the fragility and beauty of being human it is. The ability to see the beauty in what is distorted or broken is very powerful, and it’s definitely part of our culture here in India too.

When did you start designing covers?

I worked on a few book covers before going to the School of Visual Arts to do a Masters in Design. New York has had a huge impact on my practice. One of my first internships was at publisher Farrar, Straus and Giroux in Union Square. It was an awesome experience. Besides that, I was able to learn from very good designers in the United States. Some of the book designers I like are Chip Kidd, John Gall, and Jonathan Gray.

What materials and mediums do you generally like to work with?

I like to be practical and do concrete things. I love experimenting with typography. But a lot depends on what a book really asks. Often I end up working on the computer. Sometimes I get my hands dirty. For the cover of Kintsugi, I tried several things. I’ve made covers where I literally smash the ceramic and then figure out what the shards might look like on the cover. The hilarious part is that my wife is a ceramics designer, so she was shocked that I broke ceramics. Of course, I wasn’t breaking anything she had created. I was trying creative stunts with other pieces.

Buying decisions are often influenced by book covers. Do you think book cover designers get paid based on the impact they have on sales?

Not at all! The reader’s first interface with the book is through the cover, but book cover designers aren’t paid near what they should be paid based on their impact. With well-established authors, like Amitav Ghosh or Arundhati Roy, the name itself attracts the reader. With younger and less established authors, the cover plays a big role in attracting readers.

Designers have different challenges in the two contexts. Authors with large followings cannot be complacent either. They have to live up to expectations, and also try to reach new audiences. A book cover is not a painting done on a whim. It requires a solid concept and a lot of thought.

Have you ever heard of readers who bought a book because of your cover and then felt cheated because the author didn’t deliver what the cover promised?

Wow! It’s an interesting question. I don’t know if something like that happened because I can’t really connect with readers. This is the case with most designers.

Apart from the cover that won you this award, what others are you proud of?

I liked working on the cover of Kishore Bhimani’s book The accidental man-god (2012). I’m very proud of this cover because we really experimented a lot with the typography for this one. Before KintsugiI designed covers for two other books written by Anukrti — Daura and Bhaunri (2019). Both books are based in Rajasthan. I’m proud of the covers. They are graphic and have the power to grab attention.

Another cover I’m proud of is Dirk Collier’s The Emperor’s Writings: Memories of Akbar the Great (2011). I had to work with Ashraf Ansari, who did the Urdu calligraphy. The interesting part is that, historically speaking, Akbar is considered illiterate. There is no record of any letters written by him. The novel, however, is a work of historical fiction. He presents writings of Emperor Akbar to his son Jahangir. Since the art of writing is really important for the book, we decided to use Islamic calligraphy to create a portrait of Akbar seated and holding a rose in his hand. I love experimenting with fonts.

Tell us about the Typecraft Initiative you’re involved with.

This initiative involves working with South Asian craftswomen to create beautifully designed typefaces from traditional crafts practiced in rural and tribal communities. The idea behind this is to recognize that we are stuck in a colonial mindset where the mind is considered superior to the hand, so the designer is always valued more than the craftsman. Designers generally gain a lot from their interactions with artisans, but the reverse is not true.

We run workshops for artisans so they can learn design skills and apply their minds to think of new forms and possibilities on their own instead of being heavily dependent on designers. Artisans often come from marginalized or discriminated communities. An important part of the initiative is to create a sustainable income for community members. We also want to spark conversations about gender discrimination and minority rights.

You worked on a book. What is it about ?

I have no idea when the book project will be finished but it is based on my research on the informal economy of urban India. My plan is to focus on the lessons I’ve learned from people who live and work on the streets with limited resources, people who innovate and recycle. They may not know any of these terms, but they have a lot to teach designers like me.