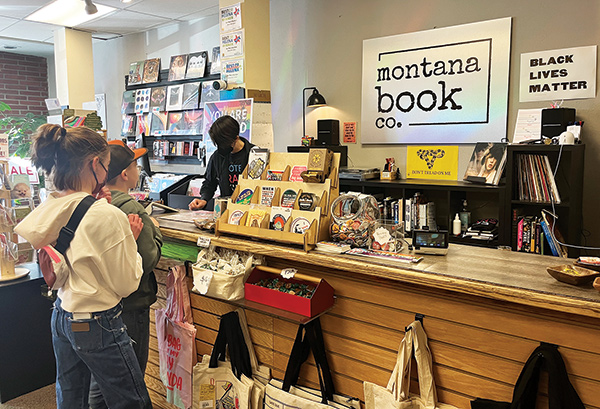 Montana Book Co. in Helena bills itself as one of the loudest bookstores in the country. Co-owners Chelsia Rice and her partner Charlie Crawford strive to provide a community hub to share ideas, as well as a safe, female-led, non-binary space for diverse voices.

In addition to promoting outspoken activism, Montana Book Co. is shaking up stereotypes about blue states and red states in the American West. The store sold “a few hundred” copies of Ibrahim X. Kendi How to be an anti-racistsaid Crawford, and community members had a reasonable conversation about Kalispell author Ryan Busse. Shooting. On a recent day in March, the store displayed the pink, blue and white transgender flag outside its front door. A sandwich board on the sidewalk proclaimed “Protect Trans Children” and a “No War” poster in the window showed support for Ukraine.

Rice and Crawford moved to Helena after graduating and teaching in Portland, Oregon.—Rice has an MFA in writing and Crawford an MEd. “Charlie grew up in Helena and came back in 2010 as an educator,” Rice explained. “I followed in 2011 as an educator as well. Between 2011 and 2018, I spent time “advocating for patients’ rights” for the American Cancer Society, after a battle with cancer caused her to re-evaluate her career, and she and Crawford considered joining. open a bookstore. When the Montana Book and Toy Co., located on the historic street called Last Chance Gulch, became available in 2018, “we threw our hats into the ring,” Rice said.

“We’ve tripled the inventory” of books, Crawford said, while adding nifty accessories like fountain pens and stationery, and choosing not to sell toys like the old store did. Sci-fi, classic, and inclusive children’s books are popular at Montana Book Co., but customers won’t find westerns.

“We’re decreasing our Montana-specific inventory and sending people to the Montana Historical Society” for regional titles, Rice explained. “We work in conjunction with our neighboring booksellers,” directing shoppers to the nearby second-hand book store, Aunt Bonnie’s Books. Montana Book Co. also sells books for organizations such as the Lewis & Clark Library, which will provide The Lincoln Highway author Amor Towles in Helena in late April, and on April 29 the store will host an in-person event with Montana novelist Maxim Loskutoff, author of Ruthie scared (“We’re selling the hell out of this book,” Crawford said).

Rice and Crawford highlight DEIJ and human rights in their selections, and they offer educators and librarians a 20% discount. They draw a firm line between what they will and will not store. “We refuse to sell anything to right-wing pundits at Fox or anyone who champions marginalized groups,” Crawford said. “It is out of the question for me to pass on income to people who espouse hatred. We focus on doing good work for marginalized people and educating about it.

Their stance reflects progressive principles, but “it’s so rare that people come to us,” Rice said. “Usually they nod ‘I disagree’ and keep walking.” Both she and Crawford consider Montana to be “mostly a purple state” and she noted, “While Montana as a whole is more conservative, downtown Helena is open-minded. They enjoy the capital’s small-town character, which brings them closer to the state legislature and makes them likely to “meet the mayor at the coffee shop.”

Even so, “there aren’t a lot of safe spaces in the city, and it can be tough being a youngster,” Rice added. Censorship is on their mind. The store runs a YA book club for ages 13-18 and invites gender-diverse allies and readers to discuss LGBTQ characters. Montana Book Co. also devotes a lot of space to popular mid-level titles, Rice said, “and kids come in and out.”

During the summer, Helena benefits from international tourist traffic as a stopover from the national parks. “The rest of the year, the Helena community keeps us open,” said Crawford, who is grateful for the moves from small shops and local stores. Year-round, they recommend store favorites like The Rain Heronby Tasmanian novelist Robbie Arnott (they hand-sold over 70 copies), and applaud authors like Mary Laura Philpott, who endeared herself by sending her personal ARC of Shelter when a copy got lost in the mail.

“We are very lucky to be in our community,” Rice said.

A version of this article originally appeared in the 04/18/2022 issue of Weekly editors under the title: Bookstore Spotlight: Montana Book Co.