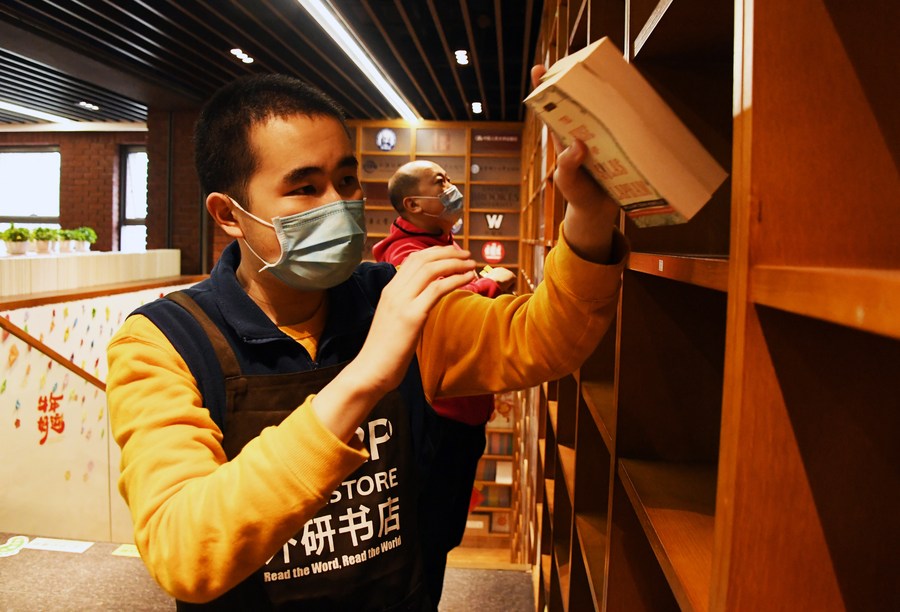 BEIJING, April 1 (Xinhua) — Customers of Beijing’s FLTRP Bookstore receive a free bookmark when buying a coffee there, but few are aware of the challenges the bookmark artist has overcome.

Kang Rui, 23, has worked at the bookstore since 2018, hand-painting posters, postcards and bookmarks.

Kang has autism and his unusual behavior and impaired conversation bother some people, but his art can enchant them and it’s a major attraction for the bookstore.

Autism in China has an incidence of 0.7% and more than 2 million children under the age of 12 have autism. This figure increases by about 200,000 each year.

As World Autism Awareness Day approaches on April 2, Kang’s story has been in the spotlight as he is one of the lucky few to find a job they love and support to their needs.

Kang can paint landscapes, still lifes, cartoon characters and self-portraits. His work is exhibited in neighboring schools as well as at the bookstore. He created a set of winter sports themed paintings for the Beijing Winter Olympics and they were displayed in the organizing committee building.

Kang Rui (L), with his mother, shows a painting he drew at the bookstore in Beijing on March 25, 2021. (Xinhua/Ren Chao)

Working as a bookseller brings him joy and a sense of accomplishment. Many see him as a genius, but fail to see the sacrifices behind the scenes.

Like most Chinese parents, Kang’s mother and father were determined that their son would receive the best education.

After Kang was diagnosed with autism at age 5, his mother quit her job to care for him and his father was solely responsible for earning money. The couple did not have a second child so they could focus on Kang.

Children with autism have difficulty communicating because they often do not recognize or understand the emotions or feelings of others. Kang’s parents tried to send him to a regular kindergarten, but he found it difficult to interact with the other children and his eccentric behavior earned him taunts.

Kang had no formal schooling. He began painting at age 12 in classes at the Beijing Golden Wings Art Rehabilitation Service Center for Disabled Children, where he discovered his gift.

Today his work has been widely acclaimed and has been exhibited in galleries around the world.

Kang Rui presents his posters at the bookstore. (Xinhua/Yin Pingping)

Fu Shuai, manager of the bookstore, saw Kang’s work in a national children’s art competition and thought the bright colors and vivid characters could add warmth to his store.

However, when Fu first offered the job to Kang, his mother refused, fearing that her son would get away with it.

Fu persisted and convinced the family that Kang would receive care and support. The bookstore offered Kang a special room as a studio, and Kang was allowed to work from home or be accompanied by his mother in the store.

Kang Rui (L) organizes books with his colleague (C) at the FLTRP bookstore in Beijing on March 25, 2021. (Xinhua/Ren Chao)

Fu said he never feared the special staff member’s behavior would hurt the business and he believed his customers would understand.

He says the job gives Kang a connection to society and allows society to connect with him and understand autism.

“A bookstore is a window to civilization. A civilized society should provide opportunities for the underprivileged,” Fu said. ■